In Exscudo ecosystem, there is a number of products and services operating with user accounts (Exscudo Exchange, Fintap, etc.). A user account is a primary connection (in some cases - the only connection) a user has to assets in possession.

While accessing and managing these accounts, one deals with hardware and software products, web services, Internet connenction services, saved passwords, 2FA codes, or backed up images. The variety of tools and processes builds up an infrastructure to access and manage Exscudo accounts, and so shall be considered a system to be protected.

A failure in delivering the protection may result in theft of assets, inability to access them, or a long-term suspension of access/transactions to/of one's funds.

This article is aimed at providing a frame work for a complex understanding of the nature of the threat, key attack scenarios, and effective security measures. The article is not explaining every vulnerability, security threat or an attack scenario possible, rather referring to general security principles. Bad guys are creative, and so should be you.

Nature of the threat 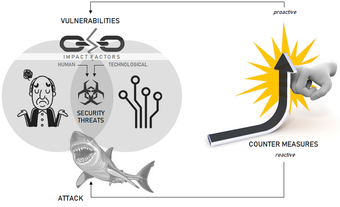 The risks outlined in the above description (loss of assets, inability to access them, or a long-term suspension of transactions) are typically realized as a result of Attacks, which, in their turn, are based on applicable Security threats resulting from actual Vulnerabilities.

Understanding the interdependencies and correlations between these three, provides a clear understanding of what Countermeasures can be, and the steps to be taken to keep the accounts secured.

A weakness which can be exploited to perform unauthorized actions. Such weaknesses may reside in a system's design, implementation, operation, controls, or management, and can be exploited in the frame work of corresponding security threats. There is a number of key factors to be considered when identifying and covering the whole variety of vulnerabilities, but the most important ones with regard to protecting Exscudo accounts are:

One of the weakest link in any system, including an information security system, the human factor mostly refers to the immanent human quality of making unintentional security mistakes as a result of negligence, underestimation of risks, overall security ignorance, resulting in the absence of a basic and consistent security policy in place. All of which creates a group of specific vulnerabilities related to this factor, that can be exploited by their specific security threats (e.g., a chance of exposing entered credentials when demonstrating a screen during a Skype call).

Derives from the following features of modern hard- and software solutions:

Combined together, the above factors and features create numerous vulnerabilities that can be exploited.

A next-level substance of the discourse, referring to the very possibility of exploiting a vulnerability, or a number of vulnerabilities as a transition to a logically concluding attack. May, or may not be malicious by nature (intentional, or accidental).

Actions that use vulnerabilities to realize a threat. While there is a countless number of attack scenarios that can be grouped in any suitable way, depending on research type, there is no need in operating with a matrix of attacks to have an understanding of countermeasures to take.

The table below provides a couple of examples of vulnerabilities to be exploited against resultant security threats, and the consequent attacks aimed at either gaining unauthorized access to an Exscudo Exchange account, or at termination of such access.

Security threats are derived from vulnerabilities and are utilized in attacks, being a transitional substance. The countermeasures, in their turn, are the measures aimed at reducing the probability of an attack, or the impact of a threat, as well as to minimize the impact of an attack that has already happened. Therefore, they address vulnerabilities, and attacks, while not addressing the security threats.

An important aspect in understanding Exscudo ecosystem is the sophisticated security policy to prevent scenarios that may lead to user'accounts and assets being compromised or stolen. While the countermeasures implemented and executed by Exscudo are not the subject of the article and will not be explained further, there are the following key features of the security policy to be considered:

The users have to apply security measures aimed at protecting the following objects against unauthorized or breached access, as well as against loss or destruction, by themselves: 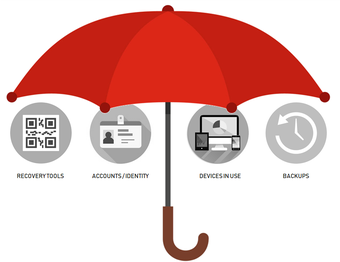 The proactive countermeasures are aimed at building a defense against future attacks to prevent the damage, addressing the vulnerabilities. The below tables summarize key recommendations, grouped by objects to be protected:

If applicable, it is recommended to complete Know Your Customer (KYC) procedure of the maximum tier available. It helps us identify account owners fast, which is crucial for the safety of funds in many scenarios.

*For example, you may receive a message from an address such as [email protected] which contains a prompt to action such as following a link to "secure" your account or claim some kind of reward.

Taken in scenarios, where an attack has already happened, or risks of an attack have grown significantly (e.g., a loss of device used to access Exscudo products and services), and the damage (to a full, or to a certain extent) has already been done. Reactive countermeasures are aimed at minimizing the damage.

There are three key points to be considered when designing and taking reactive countermeasures:

Therefore, securing one's account after an attack often implies a timely and active cooperation between a user and Exscudo team. The table below provides a summary for a number of sample scenarios: