Every user of products and services of Exscudo can play an integral role in developing the ecosystem by participating in various bounty programs. At Exscudo, we strongly believe that it is partnerships with users that make our products and services, as well as their recognition, evolve. In this regard, the participants of bounty programs get rewarded with EON tokens. The tokens are to be claimed and received. This article describes the necessary steps.

There were, are, and will be various Exscudo bounty programs. The diagram below summarizes the types of past and current programs. 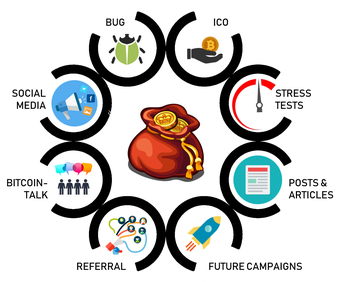 While being different by their nature, goals and the participation terms, they have one thing in common: EON tokens gained as a reward and the way one can claim and access them.

To claim a reward, one has to earn it first. This is done by signing up to a corresponding bounty program, and completing bounty tasks.

The earned tokens are transferred to an isolated section of a user's personal cabinet in their Exchange account. So, there is a prerequisite to the process - one has to create an email-based Exscudo account.

There is another mandatory step after creating an Exscudo Exchange account - to complete the KYC procedure (Know Your Customer). If not completed, the bounty tokens can and will not be deposited due to legal restrictions.

To access bounty tokens earned for the completion of bounty tasks, go to Preferences tab (gear icon) → Tokens → Bounty (depending on the source of the bounty) as depicted on the below screenshot:

You may now withdraw your tokens from the bounty repository to an EON wallet of choice.