Checking generated blocks and earned rewards for a node

The architecture of EON blockchain is node-centric. Nodes in a network can validate transactions earning rewards. This article is addressed to node owners and explains how to check the blocks generated by their modes and their rewards for block generation.

To check the rewards for block generation, one needs to download an EON desktop client. A desktop client is a console-based software allowing a user to connect to EON blockchain and perform a variety of tasks. There are versions of the client for popular operating systems that can be downloaded from:

This article provides explanations (including commands and screenshots) for Ubuntu OS. They are applicable to Windows and macOS, provided that corresponding adjustments are made 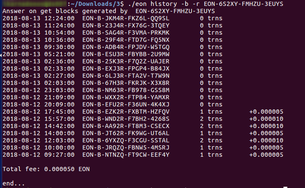